Ovariohysterectomy, commonly known as spaying, is a surgical procedure where a female dog’s ovaries and uterus are removed to sterilize her and prevent going into heat or getting pregnant. Some veterinarians opt to remove only the ovaries, a procedure called ovariectomy.

Sadly, there are cases where a spayed female dog can bleed from the private area, either soon after the surgical procedure or weeks or even months later.

A spayed female dog bleeding from private area can worry any pet owner. That’s why it’s important to understand the possible causes and situations when you should seek veterinary help. Causes of spayed female dog bleeding from the private area

If your female dog has been spayed but bleeding from the private area, it could be caused by a tumor, an infection, anatomic abnormality, blood clotting disorder, urinary tract issues, vaginal inflammation, or is suffering from postoperative trauma.

Let’s have a look at each of the potential causes below:

Vaginal inflammation or vaginitis is an infection of the urinary tract caused by bacterial infections, anatomical anomalies, and cancer.

Signs of vaginal inflammation you should look out for include:

If you notice any of these symptoms and your female dog’s private area is visibly swollen, we recommend taking her to a veterinarian for an examination. Delayed intervention might require the use of surgical procedures to treat the condition.

Ovarian remnant syndrome occurs when ovarian tissue remains inside the body after spay surgery. A female dog that has undergone complete spaying (removal of both the ovaries and uterus) cannot produce estrogen, a hormone that triggers a dog to go into heat.

This means the presence of vaginal discharge, which is one of the signs a dog is in heat, could be a result of the presence of a functioning ovarian tissue (called ovarian remnant) producing estrogen.

We recommend taking your dog to the vet if you spot any of these symptoms. The veterinarian will conduct diagnostic tests, which include vaginal cytology, baseline hormone level tests, ultrasound, and hormone stimulation test to determine if an ovarian remnant is the cause of the swelling and discharge.

Common signs of vaginal tumors in dogs include:

Do not hesitate to seek veterinary help if your spayed female dog is bleeding from the private area as it could be a sign of a vaginal tumor that should be removed as quickly as possible.

A spayed female dog discharge could also mean she’s suffering from vaginal malformations caused by different factors. Anatomic abnormalities a female dog can suffer from include:

Causes of vaginal abnormalities in female dogs include hormonal, congenital, inflammatory, cancerous, or traumatic. A female dog with any of the above vaginal malformations will display one or a few of these signs:

A dog can suffer from post-surgical complications after spaying such as stitches or staples being detached. This might need re-suturing the entire incision to prevent excessive bleeding, organ prolapse, and infections.

The veterinarian will suture the cause of any internal bleeding if any and treat other complications. They might also recommend the use of antibiotics to prevent infections.

Keep in mind that the invasive nature of the surgical procedure will cause the surrounding area to have a red or purple hue. The blood collects and pools under the skin of the surgical area, causing a bruise-like effect.

Just check to confirm the bruising is localized to the surgical area and not spread all over the entire abdomen, which could be a sign of internal bleeding.

Urinary tract infection in dogs is an infection of the urinary tract mainly caused by bacteria. It is one of the most common bacterial infections in dogs with more than 14% of all dogs suffering from UTI at least once in their lifetimes.

UTIs are more common among female dogs than males. Dogs with other health complications such as Cushing’s disease and kidney disease are at a higher risk of getting an infection.

A spayed female dog can get a urinary tract infection and notable signs will include:

Blood-clotting disorders can also be the explanation for a spayed female dog bleeding from the private area. In this case, platelets do not respond as they should in the clotting process.

For example, the platelets fail to separate as they should or the dog’s immune system mistakenly destroy them, which in turn affects the efficient clotting of the blood.

In the event of a severe clotting problem, a dog will experience uncontrollable bleeding and excessive bruising.

Signs of clotting disorders of the platelets in dogs include:

Causes of blood-slotting disorders can be grouped into two categories – congenital and acquired. Congenital causes include diseases such as:

The acquired causes of the blood-clotting disorder include:

There are also other causes of blood-clotting disorder in dogs including neoplasia, bone marrow tumor, chronic infections, anemia, hepatitis, parvovirus, and leptospirosis.

A hormonal disorder is caused by an imbalance in hormone levels either because the body is producing too much or too little of a specific hormone. Health effects of hormonal imbalances vary with some endocrine diseases proving fatal if left untreated.

A traumatic injury or foreign materials within the vagina can also be the cause of a spayed female dog bleeding from the private area.

You should take your dog to the vet if the injury is causing substantial bleeding or you suspect the presence of foreign materials within the vagina as the cause of the bleeding.

Let’s now have a look at a few frequently asked questions about female dogs bleeding from the private area.

a). Is it normal for a spayed female dog to bleed from the private area?

It’s normal for minor bleeding to happen soon after spaying. On the other hand, bleeding long after spaying is not normal and could be caused by vaginal inflammation, ovarian remnant syndrome, vaginal tumors, anatomic abnormalities, urinary tract infections, blood-clotting disorders, or even hormonal disorders.

b). Do female dogs bleed once spayed?

Female dogs can experience minor bleeding soon after spaying. It could be due to post-surgical complications such as stitches or staples being detached. However, if the bleeding is excessive you should seek veterinary help as quickly as possible. Excessive bleeding can be fatal.

c). Can a female dog be bleeding years after being spayed?

d). Can a spayed female dog go into heat?

A spayed female dog cannot go into heat, especially if the ovaries and uterus were removed. She can no longer produce the estrogen necessary to trigger her to go into heat. However, in case there’s an ovarian remnant still producing estrogen, the dog will display signs of being in heat but cannot achieve successful mating because there are no ovaries.

If you notice blood in your dog’s urine, this video explains the potential causes and what you need to do. Video courtesy: Dogtor Pete. 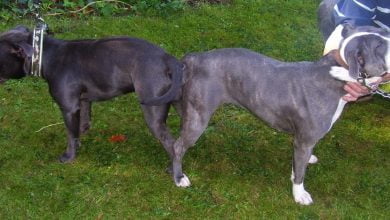 Does Neutering Help With Aggression in Male Dogs?