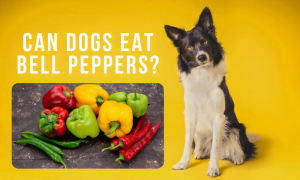 Trying to keep track of all the foods that are safe for dogs can be a daunting task.

We often think that if the food is safe for us, then it’s also safe for our dogs. However, there are dozens of foods poisonous or toxic to dogs.

How about bell peppers? Can dogs eat green peppers? If they can, how much can cause health problems to your dog? Below we answer all the questions to keep you informed.

Yes, dogs can eat red peppers. Of all the bell peppers, red peppers contain the most vitamins and antioxidants, which include 11 times more beta-carotene than green peppers. They are also high in vitamins A and C, which are antioxidants and helps maintain the healing properties of the dog’s body such as the creation of new skin tissue.

Is chili safe for dogs?

Unlike bell peppers, chili is not safe for dogs to eat. Chilli contains an active ingredient called capsaicin, which is responsible for the hot, burning sensation we feel whenever we eat it. Capsaicin is an irritant that can cause gastrointestinal issues in dogs.

While chili is not toxic to dogs, your fluffy friend is likely to experience a sore stomach and diarrhea after consuming it. A sore stomach could drive your dog to drink an excessive amount of water, which could lead to bloating. Apart from chili, you should also avoid feeding jalapeños, cayenne, or piri piri peppers to your dog.

Are bell peppers good for dogs?

Half a bell pepper contains roughly 18 calories, about 3.6g of carbohydrates, and 0.6g of protein. It also contains a small amount of fat and sodium, along with the vitamins mentioned above. Most dogs find the taste and crunchy feel of bell pepper appealing. Just make sure they do not consume too much pepper.

How many bell peppers can dogs eat?

Large dogs can eat half a bell pepper a day but small dogs should not eat more than a quarter a day. If you’re feeding bell pepper to your dog for the first time, start with small pieces to see how they react and to make sure it doesn’t make them sick.

Vomiting and diarrhea are the common signs when dogs eat too many bell peppers. If a dog eats spicy bell peppers, notable symptoms will include nausea, diarrhea, vomiting, dehydration, and an upset stomach. Keep your dog’s bell pepper consumption at the minimum and make sure it does not eat spicy bell peppers.

Although some pet owners believe bell peppers help kill intestinal worms in dogs, there’s no scientific proof to reinforce this belief. If you’re concerned your dog might have worms or parasites, it’s best to consult your vet for professional, medical advice as well as ideal treatments and preventatives to keep ward off worms.

It is safe for dogs to eat green peppers, as well as yellow, orange, and red bell peppers. Bell peppers contain lots of nutrients and vitamins beneficial to dogs. However, make sure your dog does not eat spicy bell peppers as it could suffer from nausea, diarrhea, vomiting, dehydration, and an upset stomach.

8 Types of Abnormal Heat in Dogs

7 Reasons Why a Dog in Heat is Bleeding Too Long